At a Children’s Hospital, a Wave of Young Patients Struggling to Breathe

A federal “surge team” is helping exhausted doctors and nurses through one of most trying periods in the history of Children’s Hospital New Orleans., 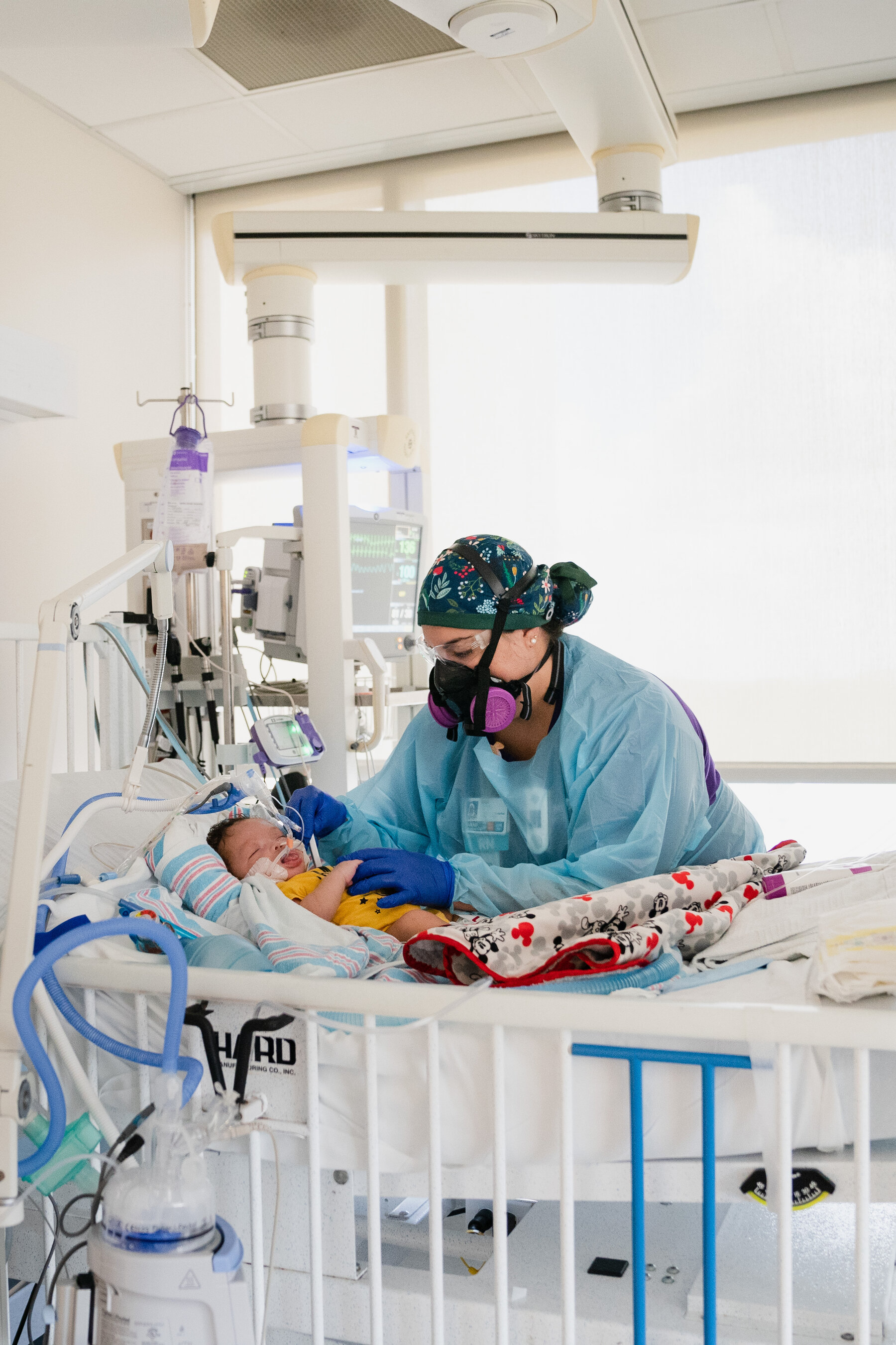 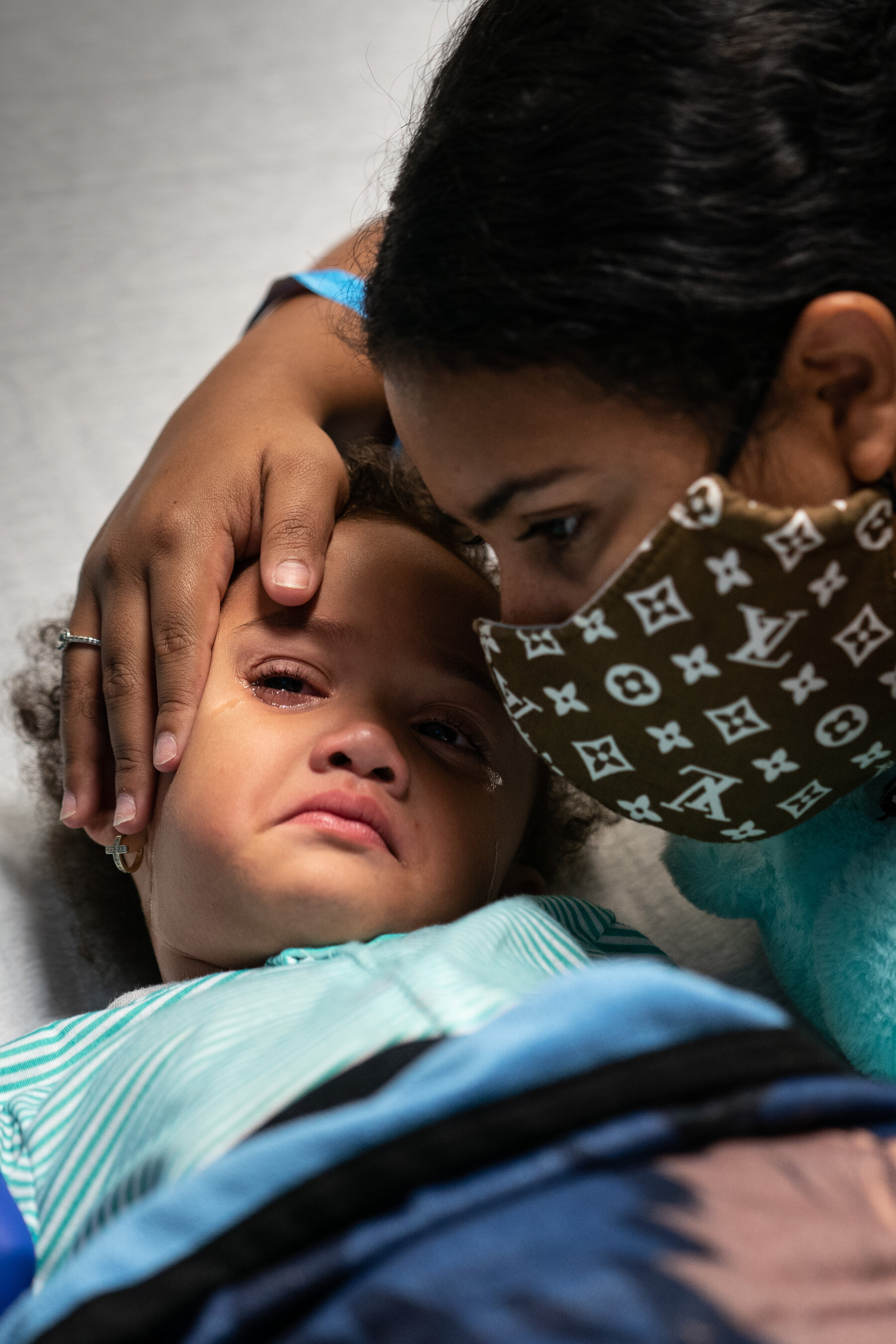 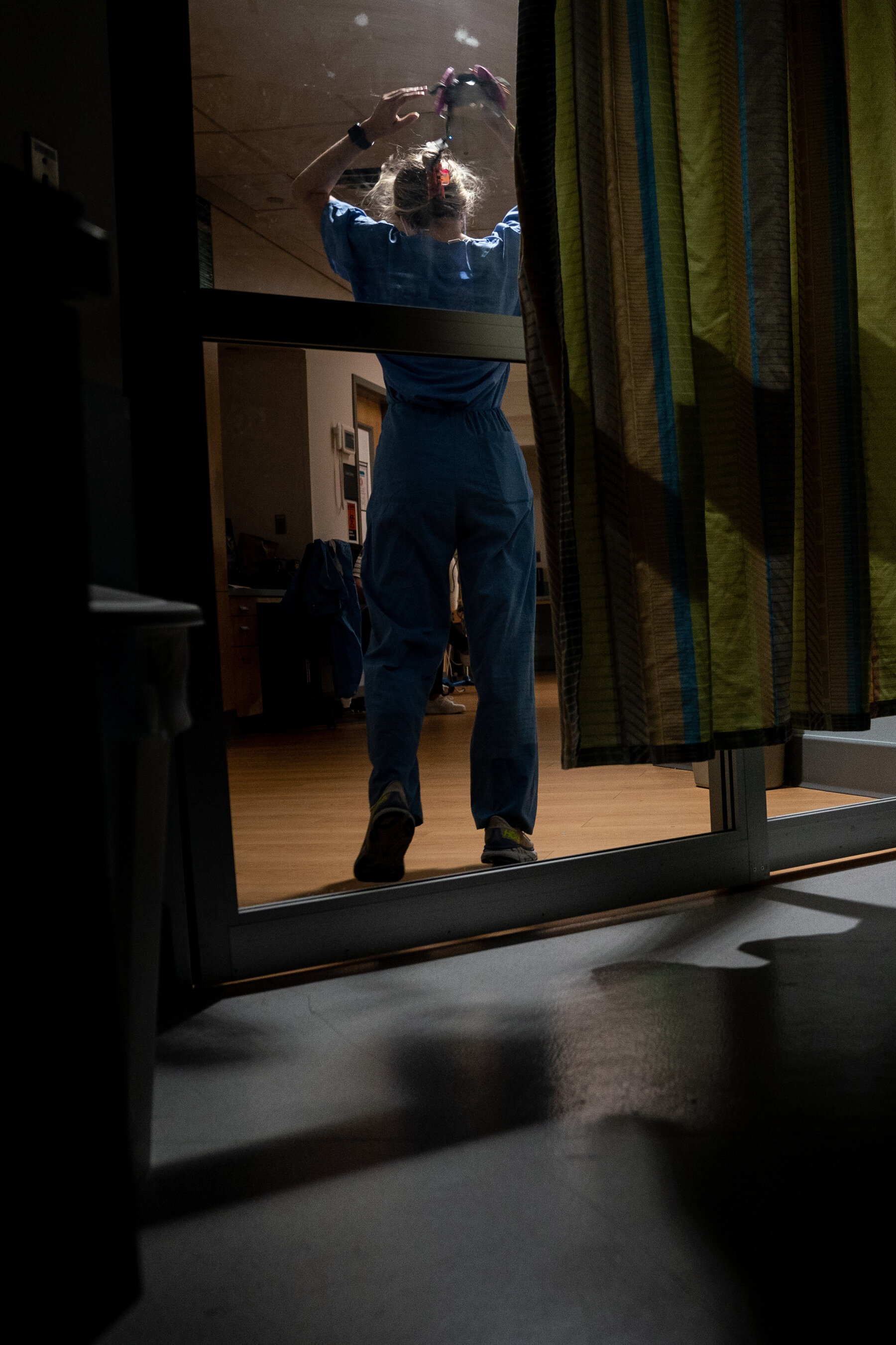 Children’s hospitals around the country are seeing a surge in Covid-19 patients, including this two-month-old baby in New Orleans.

The care that pediatric specialists are trained to provide to the sickest patients has been disrupted by the Delta variant, transforming quiet I.C.U.s into chaos.

The crush of Covid-19 cases at Children’s Hospital New Orleans grew so dire this month that the state called in a federal “surge team” of emergency responders to help.

NEW ORLEANS — Helpless to improve her infant son’s breathing as he was about to be intubated, Catherine Perrilloux did the only thing that came naturally to her in that moment, the worst of her life: She looked away and prayed. The boy, known as Junior, was two months old and gravely ill with Covid-19.

“I see a bunch of them crowding around the room with the ventilator machine, and then they pull out the tubing, and I’m just losing control,” Ms. Perrilloux, a dean at a nearby private school, recalled last week in her son’s room in the pediatric intensive care unit. “There’s nothing that you could say to make it better. You can’t do anything. It’s just paralyzing.”

At Children’s Hospital New Orleans, where the intensive care unit has been jammed with Covid-19 patients, scenes like this have played out unrelentingly over the past month. Nurses raced around monitoring one gut-wrenching case after another. One child was getting a complicated breathing treatment known as ECMO, a last resort after ventilators fail, which nurses said was almost unheard-of for pediatric cases. About a half-dozen others were in various stages of distress.

“We all thought, ‘Well, thankfully it’s not happening to the kids; none of us would be able to stomach that,'” said Mark Melancon, a longtime nurse at the hospital, recalling previous stages of the coronavirus pandemic. “Fast forward to now, and it’s happening with the kids.”

Mr. Melancon said that until this summer, the hospital had treated only one or two Covid-19 patients at a time. Now, a procession of patients require constant attention, their oxygen levels often dipping precariously low without maximum intervention.

As children’s hospitals in many parts of the United States admit more Covid-19 patients, a result of the highly contagious Delta variant, federal and state health officials are grappling with a sharp new concern: children not yet eligible for vaccination in places with substantial viral spread, now at higher risk of being infected than at any other time in the pandemic. Nowhere is that worry greater than in Louisiana, which has among the highest new daily case rates in the country and only 40 percent of people are fully vaccinated, putting children at particular risk as they return to school.

Most children with Covid-19 have only mild symptoms, and there is not enough evidence to conclude that Delta makes some of them sicker than other variants do, scientists say. Doctors and nurses at Children’s Hospital agreed with that assessment.

Theresa Sokol, Louisiana’s top epidemiologist, said that people younger than 18 had among the highest test positivity rates in the state and were responsible for a significant share of transmission, with many cases most likely undetected.

“So many days are filled with this puzzle of: We don’t have enough beds for this patient who wants to come, so how are we going to shuffle our children around to accommodate one more?” said Devon H. Relle, a pediatric nurse practitioner at Children’s Hospital New Orleans, where she worked the front desk of the 17-bed I.C.U. The hospital was also seeing an early, worrisome wave of respiratory syncytial virus, known as R.S.V., which can cause some of the same symptoms and was contributing to the overflow conditions.

The crush of Covid-19 at Children’s Hospital grew so intense this month that the state called in a federal “surge team” of emergency responders from the Department of Health and Human Services’s National Disaster Medical System. The group of about 14 included a physician, a nurse practitioner, nurses, paramedics, a respiratory therapist and a pharmacist.

The team was the first assigned to a children’s hospital during the pandemic.

“Covid-19 right now down here is so endemic that you don’t have to have a specific exposure, because it’s just out there,” said Anne Barylick, a nurse practitioner on the surge team who handled patient intake in the emergency department and Covid-19 units. “Statistically, you’re going to run into it.”

Dr. Mark W. Kline, the hospital’s physician in chief, said that its overcrowded units threatened care for children across the region. It is one of the few advanced children’s hospitals in Louisiana and bordering states, he said, and there are few other options for specialized pediatric care.

Ms. Barylick, who works at a community health center in Rhode Island, was also deployed to New Orleans after Hurricane Katrina. But this deployment was fundamentally different, she said. Instead of helping with a field hospital or pop-up clinic under a tent after a natural disaster, she and her colleagues were woven into the hospital’s normal operations. They rotated with members of the regular nursing staff to triage young patients and greeted them in the emergency room to assess whether they might have Covid-19.

The need here was clear.

“I have never seen our faculty look so tired or sad,” said Dr. Adele K. Evans, who leads the hospital’s tracheostomy team. About 60 members of the medical staff were in quarantine last week. She called it the most difficult moment in the hospital’s history.

It was hard to predict which of the hospital’s Covid-19 patients would recover, Ms. Barylick said. To her relief, she had seen mainly good outcomes.

“I don’t want any kids to get this, because I can’t guarantee that it’s not going to be your kid that’s going to have a problem,” she said. “But overall, statistically, most of them are doing fairly well.”

But the sickest Covid-19 patients in the hospital were as severely ill as adults, nurses said, struggling to get enough oxygen. While some children were suffering more because of underlying health problems, other severe cases at the hospital had little explanation.

“You can’t show them, really, to be honest, that this is kind of uncharted territory,” Mr. Melancon said of the anguished conversations he has with parents of children sick with Covid-19. “You’ve got to project some confidence.”

Members of the surge team and the hospital staff said in interviews last week that Covid-19 had changed how providers cared for young patients, forcing them to “cluster” care by entering rooms less frequently but with more staff. That, along with limits on visitors, meant children were sometimes alone, said Angela Seput, the director of an acute care unit. And with highly infectious patients nearby, parents could no longer approach the nursing station as easily and ask for help, she said.

Medical staff throughout the hospital said the causes of illness in children were often simple: parents, family members and friends who were unvaccinated and not wearing masks.

“I’ve had to kind of make peace with that people are not doing what they’re supposed to. The kids are suffering,” Mr. Melancon said. “Not that I accept it, but if I get hung up in the anger of it, I would walk around confronting people in Walmart, here, everywhere.”

“I can’t tell them, ‘Why didn’t you isolate this kid?” Mr. Melancon continued. “So we just tell them, ‘Your kid has Covid. It’s really hard on the lungs. Your child’s very sick. We’ll do everything we can to get him better.’

Of the roughly 70 children admitted to the hospital with Covid-19 this month, about half were 12 or older — and thus eligible for vaccination — but only one was fully vaccinated, said Dr. Kline, the physician in chief.

The virus had wreaked havoc particularly on patients with special needs and pre-existing conditions, including Calvin Bethley’s son, who has asthma and scoliosis. He was just beginning to eat again after a long bout with Covid-19 and related pneumonia.

Two doors away, Quintetta Edwards watched over her 17-year-old son, who has Down syndrome and was healing from his own lengthy battle with the virus. During his stay, staff members sometimes had to restrain him as he writhed against the tubes connected to him. Ms. Edwards said she felt a sense of profound guilt when her son told the nursing staff that his illness was his own fault.

In the I.C.U. last week, Raquel Diaz, who has worked as a janitor there for over a decade, said the surge of Covid-19 patients had left her demoralized and worried about her own safety, even after being vaccinated and battling the illness last year.

Seeing children in the rooms that she cleans suffer, she said, was “overwhelming.”

Behind her, beeping screens monitoring the low blood oxygen levels and alarmingly high heart rates of the children told the story.

Nearby, medical teams were watching over an intubated toddler. The patient eventually needed a rare treatment known as high-frequency oscillatory ventilation, which involves gentle vibrations that move air around in the lungs. By Thursday, with the odds of survival fading, a small crown was placed on the child’s head.

Down the hall, there was better news: Junior’s condition was improving.

His path to intubation had been swift. His sister, 15 months old, came down with what seemed to be a mild cold. Before long, Junior’s day care reported that he was gagging when drinking from a bottle. The family’s pediatrician diagnosed him with R.S.V. and prescribed albuterol, an asthma medication that had little effect on him.

A day later, Ms. Perrilloux, who along with her husband is fully vaccinated, drove him to the hospital. “As soon as I brought him in, they noticed right off the bat, something was off,” she said. He tested positive for Covid-19 and struggled to breathe even on a high-flow oxygen machine. He was intubated the next day.

Ms. Perrilloux began working during the long days in the room, to keep herself from shaking.

“You’re sitting there, thinking, ‘What could I have done differently?'” she said.

Last week, Ms. Perrilloux slept and ate in her son’s room. She held daily prayer sessions with her pastor and family. At bedtime, she smoothed Junior’s curly brown hair gently to avoid interfering with the machinery that was keeping him alive. She positioned her chair to observe the monitors tracking his vital signs, wrapping herself in hospital blankets.

“With the six sisters that he has at home, he has no choice but to be strong,” she said.

Ms. Perrilloux received the news shortly after 8 a.m. on Friday: The hospital was ready to try extubating Junior and putting him on oxygen. Around 10:30 a.m., Ms. Perrilloux clasped her hands and prayed. As the I.C.U. team delicately removed Junior’s breathing tube, there were quiet cheers.

Junior left the I.C.U. on Tuesday but remained in the hospital on high-flow oxygen, still with occasional moments of irregular breathing. Ms. Perrilloux has taken to playing Etta James for him in his new room.