Late on Thursday night, hurricane watches were issued for most of the Louisiana and Mississippi coasts.,

Tropical Storm Ida is swiftly heading for landfall in the United States.

Hurricane forecasts are typically issued five days in advance once a storm has formed, but people in the path of Tropical Storm Ida, a fast-charging storm in the Gulf of Mexico, have had significantly less time to prepare for landfall.

Ida passed through the Cayman Islands early Friday, less than 12 hours after forming, and could strike Louisiana, which was battered by hurricanes last year, as a Category 2 hurricane on Sunday, only three days after forecasters determined that a weather disturbance over the southern Caribbean had become a tropical depression. That designation by the National Hurricane Center triggers the forecast products associated with tropical storms and hurricanes.

Forecasters had been monitoring the system for several days, but models had predicted a more westward track toward Mexico or the southern Texas coast. The storm’s formation occurred farther north than had been expected, leading to the accelerated timeline and greater risk to the northern Gulf Coast. 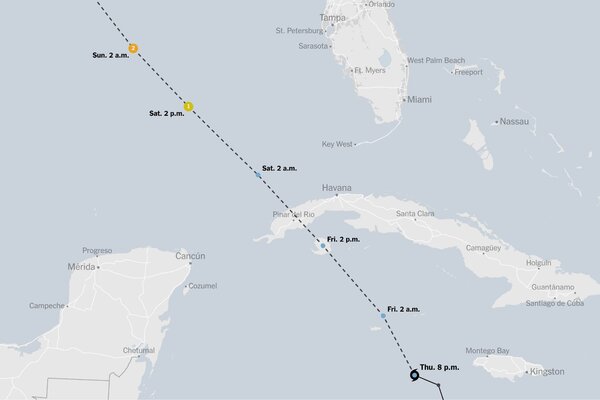 A map showing the storm’s route as it moves toward the Gulf Coast.

Ida officially became a tropical storm when its surface winds exceeded 39 miles per hour and is expected to become a hurricane as it moves northwestward over the Gulf of Mexico. A warm upper ocean and low vertical wind shear — which allows the storm to remain upright — will favor further strengthening.

Late on Thursday night, hurricane watches were issued for most of the Louisiana and Mississippi coasts; a tropical storm watch was issued for the entire Alabama coast.

“Ida could be near major hurricane strength when it approaches the northern Gulf Coast,” the National Hurricane Center said in a forecast update.

The center introduced the designation “potential tropical cyclone” in 2017 for systems that were not yet tropical depressions but were likely to develop quickly enough to pose a threat to land within 48 hours. This option was not used for Ida, which reached the Cayman Islands early Friday and was headed in the direction of western Cuba.

After that, Ida is on a path toward Louisiana.

The state was hit by several storms last year, hobbled by Cristobal in June, Laura and Marco in August, Sally and Beta in September, and Delta and Zeta in October. The most damage came from Laura, a Category 4 hurricane that was one of the most powerful storms to ever hit the state, and Delta, which unleashed considerable flooding.

Remove a Confederate Statue? A Tennessee City Did This Instead.

Victims of Charlottesville Rally Argue the Violence Was Planned