The C.D.C. now recommends that all adults get a booster. But only one in six Americans has received that shot, worrying health officials.,

The C.D.C. now recommends that all adults get a booster. But only one in six Americans has received that shot, worrying health officials.

SACRAMENTO — Nine months ago, the lines stretched out the doors at Dr. Rusty Oshita’s three urgent care clinics, teeming with patients frantic to get vaccinated against Covid-19.

Walk-ins jammed the parking lots and mini-mall sidewalks, some crowding too close, some bluffing to make the cut, hoping to pass as over 65 or essential workers. Now with the Omicron variant driving a new surge, Dr. Oshita has awaited a new rush, for booster shots this time.

So far, he has been waiting in vain.

“It’s scary,” the physician said this week as patients drifted in and out of his storefront in a Whole Foods shopping center in suburban Sacramento. “We’re not seeing the rise we were hoping for.”

As the pandemic has surged toward its third year, shape-shifting into the contagious new Omicron variant and spiking dangerously in the Northeast, around the Great Lakes and in other parts of the country, health officials and epidemiologists are vehemently urging Americans to get vaccinated and boosted. But the going has been slow.

Of American adults who are fully vaccinated and eligible for a booster shot, only about 30 percent have received one, according to data from the Centers for Disease Control and Prevention. And among all Americans, only about one in six has received a booster. On Friday, as New York City was racing to confront a precipitous surge in infections, city officials said only about 1.5 million New Yorkers out of more than 8 million had received booster shots.

Some states may be undercounting, but the lag is alarming because Omicron infections appear to evade regular one- or two-dose vaccinations. Vaccines still provide robust protection against death and severe illness, but when it comes to preventing the virus from getting a foothold in the first place, scientists increasingly believe that three shots are the new two shots.

Just over half of Americans 65 and older — the population most vulnerable to a severe outcome from the virus — have received a booster. And public health experts are concerned that socioeconomic disparities in vaccination rates will be exacerbated as booster shots roll out. Difficulty in taking time off work and disconnection from health care systems have contributed to a persistent gap in vaccination rates between the most and least socioeconomically vulnerable counties.

Among the states, booster rates are mostly correlated with vaccination rates, with the lowest rates in the south. West Virginia has among the lowest booster rates, with 26.6 percent of people 65 and over, while Minnesota is the highest with 71.2 percent of that age group, according to an analysis of the C.D.C. data by Jen Kates, senior vice president of Kaiser Health Foundation.

Widespread, lasting immunization is critical to controlling the virus, according to health officials. Every poorly protected lung is a safe harbor for Covid-19 to spread and mutate. And every surge further exhausts the nation’s already depleted health care system, consuming finite hospital staff, resources and attention that then cannot be used to treat people with other serious illnesses.

Normal life in this country, scientists say, depends on the willingness of Americans to act both in their individual and in the broader community interest. The vaccine rollout, a year old this week, has averted about a million Covid deaths and 10 million hospitalizations, according to a recent report by the Commonwealth Fund. 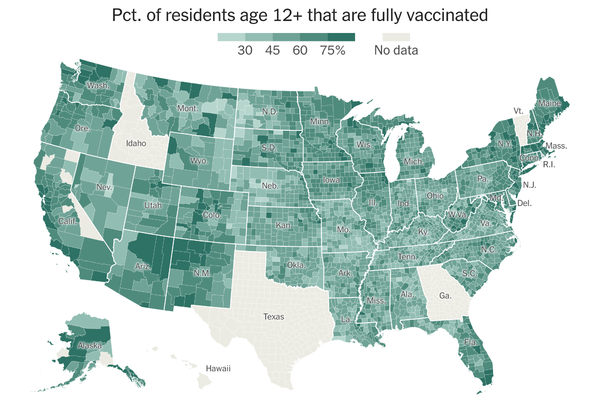 See How Vaccinations Are Going in Your County and State

See where doses have gone, and who is eligible for a shot in each state.

But it has been plagued by polarization, misinformation and lately by muddled communication from the federal government — first over who was eligible, and most recently over whether a booster shot would make a difference.

“The vaccines have been fairly politicized, and there’s a lot of confusion — about the data that comes out, about ‘will the booster even protect me?'” Dr. Oshita said.

“I know there are individual considerations and I don’t want to pass judgment. But personally, as someone who has shoveled dirt on a 35-year-old patient’s grave site and attended a service for a 56-year-old gentleman just recently, this is something I think we all really need to look hard into.”

As recently as last month, many public health experts opposed the Biden administration’s plan to offer booster shots to all American adults. Many researchers said there was little scientific evidence to support the extra doses. Instead, they argued, the shots should be used to protect the billions of people who remain unvaccinated.

The C.D.C. initially limited their recommendation for boosters to Americans over age 50 and those ages 18 and older living in long-term care facilities. But in late November, many of the experts who opposed boosters for all reversed course.

Prompted by growing concerns about the Omicron variant, the C.D.C. now says that all American adults should get boosters. Recent studies have shown that the third dose of coronavirus vaccine may protect against the worst outcomes of the fast-spreading Omicron variant, while two shots produce a weaker antibody response. And data from November released on Friday by the C.D.C. show that fully vaccinated individuals without a booster were at least two times as likely to test positive as those who received a booster shot.

But many Americans have not gotten the message.

“When Omicron came out, the national media made such a big deal about it that there was a pretty good increase in the amount of people that went for the boosters,” said DeWayne Bush, the emergency operations coordinator for Taylor County, Texas. But demand in his area, around Abilene, has since tapered off amid reports that the variant may cause less severe disease than other forms of the virus.

“Now,” he said, “people have some questions about why was it such a big, huge issue.”

In Phoenix, Julian Montes, 19, a security guard at an Amazon facility who just got his second dose of Moderna, wondered how many boosters it would take to keep him and his family healthy.

“If the variants keep coming, is there going to be even more vaccinations we’re going to have to get?” he asked, heading into a strip mall in the working-class Hispanic neighborhood of Maryvale, which has been devastated by Covid-19 and has also had one of the lowest vaccination rates around Phoenix. “When the people you rely on for information don’t fully know what to do, it gives you a sense of doubt.”

“So do we have to get it or not?” asked Ms. Washington, who works two jobs and volunteers as a community organizer, and had been unable to make time for a booster until this week.

“I thought there was no rush.”

Misinformation and political polarization are affecting the perception of boosters, as in the broader vaccine rollout. Smaller shares of vaccinated Republicans report receiving a booster dose, compared with Democrats, including among older adults.

The booster’s importance is not failing entirely to reach the public: The share of fully vaccinated adults who report receiving a booster dose more than doubled in November, according to a Kaiser report. At least one-third of Black and Hispanic adults over the age of 50 have received a booster, and many more said they plan to get one soon, suggesting that the initial hesitancy that some had about getting vaccinated has waned.

And some people complain that they would gladly be boosted, but the shot is harder to obtain than vaccinations were earlier this year, when cities and states deployed fleets of mobile units and commandeered places like Dodger Stadium as mass vaccine centers.

“In my mom’s city of 200,000 people, there are only four locations offering it,” tweeted Patrick Carlson, a computer programmer in Seattle whose mother lives in Oxnard, Calif. Of those, he added, three did not administer shots on weekends, a fourth had no weekend appointments before the New Year, and one had no appointments before Dec. 31 at all.

With more than half of the states already reporting Omicron cases, the sense of urgency is mounting.

“Don’t wait,” Mayor Bill de Blasio of New York exhorted this week amid reports that the city’s seven-day average for new Covid infections had tripled in the last month, with hospitalizations rising.

“Get your booster shot right now, I mean right now, ahead of the holiday gatherings, while Omicron has just begun to assert itself.”

But not even the prospect of a third year of suffering seems to be sufficiently moving the needle.

Passing a pop-up vaccine clinic in Phoenix on a community college campus, Zee Wyatt, 22, and his sister Genesis, 18, said the recent push to get Americans boosted had only hardened their opposition to getting vaccinated. They were both unvaccinated and said they wore masks rigorously to try to stay healthy.

“If you came out with three shots and can still get it, it’s like, what’s the point?” Mr. Wyatt said. ‘Are we going to reach the fourth, fifth, sixth? You wasted your time.”

At the urgent care clinic in Sacramento this week, anxiety compounded the confusion.

Although California has one of the highest inoculation rates in the nation and was the first state to report a case caused by the ultra-contagious Omicron variant, a fifth of its eligible population is still unvaccinated, according to state public health statistics. And despite an initial bump after Omicron’s alarming arrival in the United States was reported, some 60 percent of vaccinated Californians have yet to be boosted.

Jim and Geraldine Lemmond, in their 80s, had been vaccinated and boosted, but had come to the clinic for coronavirus tests because they still were not sure their protection was sufficient.

Davina Brown, 38, said she was getting the vaccine only because her job required it. “I don’t like the fact that I’m being forced into something,” she said. “My choices are not my choices — there’s no personal freedom.”

Raymond Bradley, 38, had come for the booster because he had gone out to a Sacramento Kings basketball game and had come away worried about breakthrough infections. “I want to get out,” he said. “See people. Not feel as anxious. And other people aren’t getting vaccinated, so I need to protect myself.”

He is weary, he added, of worst-case scenarios and conspiracy theories. He had no adverse reaction to the vaccine and “there have to be some scientists out there doing things for the good of the people.”